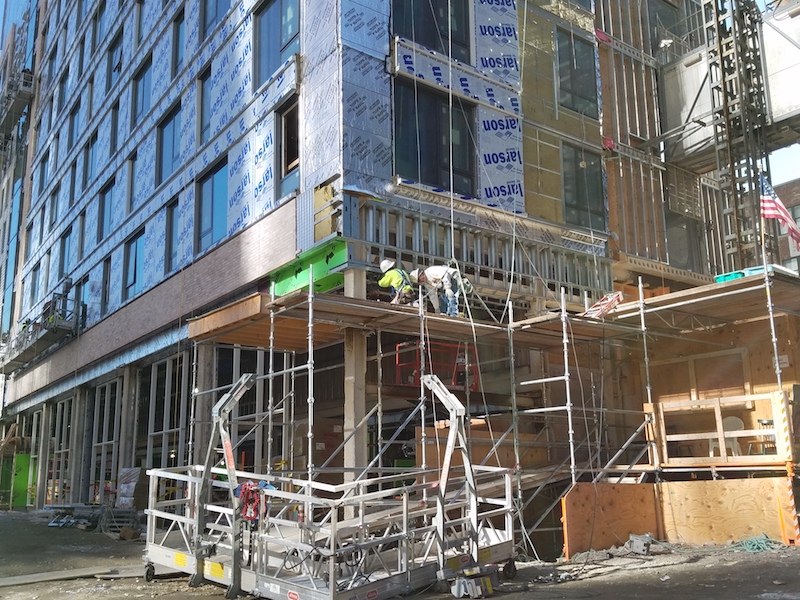 The Boston construction boom just won’t quit. In 2017, housing permits jumped up by 12 percent over 2016 — that’s a total of almost 13,000 permits. There are no signs that building will slow its pace any time soon, either. Mayor Walsh is committing to adding 53,000 new living spaces by 2030, and he’s actively soliciting developers’ ideas for re-purposing city-owned buildings like libraries, fire stations and more. Everything from affordable housing to luxury high rises are on the table, and you’re not just seeing things if you think there have been a lot more cranes touching the clouds as you drive down Storrow: Boston has the ninth most in the country right now.

So what’s hot when it comes to Boston construction projects? Here’s our list of top trends to keep an eye on this year:

In addition to the mayor’s plan to re-design 80 public spaces for housing, builders have been turning all sorts of unusual spots into construction projects. Turning empty industrial spaces into lofts and condos is nothing new, but each project is unique. The Lucas Church conversion in the South End is perhaps the best example of what thinking outside of the building box can look like, as the glass tower perched above a traditional stone church combines the old with the new.

Features that used to be luxury-only for apartment complexes and condo high-rises are becoming standard as builders cater to younger tenants with a more active lifestyle. Onsite gyms, yoga studios, dog parks and more are now par for the course when it comes to new housing. Young renters and buyers are also looking for walkability and proximity to public transportation, including bike shares and Zipcars. Nowhere are community amenities more cutting-edge that in the Ink Block development, where a co-living tower is set to cater to Millennials.

Even with all the slated development — and perhaps in part because a good deal of the new building is luxury in nature — housing stock prices are sky-high in Boston right now. For first-time buyers, owning property in the city is next to impossible. That means that they’re taking a look at the near suburbs — areas that can be reached easily by the T or Commuter Rail. East Boston and Chelsea housing are also heating up, thanks, especially to the Silver Line extension.

Yawkey Way is no more, now that the city council has approved Fenway Park’s request to change the street’s name back to Jersey Street. Street names aren’t the only thing not written in stone. While most of us are fine with calling South Boston Southie, a new development on West Fifth Street is being called SOBO Place. If this successfully re-brands the gentrifying neighborhood, it could open the door for all sorts of other name changes and new terms for the streets the cows laid out.

The only thing guaranteed to stay the same in Boston? Change itself. As the skyline continues to evolve and housing pops up in unexpected new places, we’ll keep an eye on the construction trends that keep The Hub evolving into the future.