Innovative Commercial Development Predicted to Rise for Boston in 2017 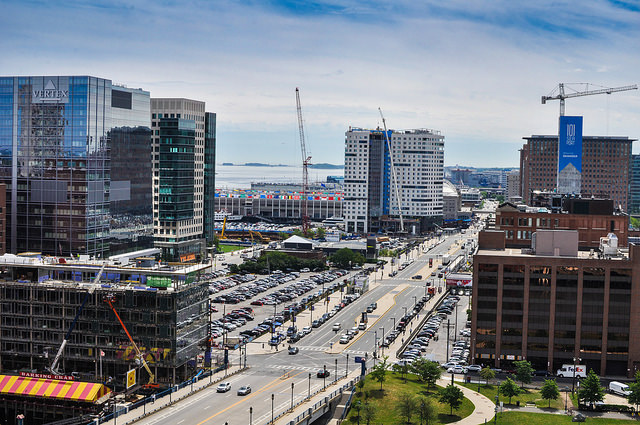 Two concepts — Innovation and Community — are intertwined to contribute to the current “health” of Boston’s downtown development. It’s particularly evident in the Seaport — and it’s no accident. Plans were laid for the reinvention of the South Boston harbor and surrounding historic area many years ago when then-Mayor Thomas Menino designated it as an “innovation district.” The envisioned rebirth, defined by a vibrant community with residences, offices and business development, is now becoming a reality. Parks, restaurants and shopping continue to attract tourists. New condos bring residents who enjoy the convenience and pedestrian-oriented lifestyle; big business finds the location and the “vibe” distinctive.

The growth is well documented, with 10 million square feet of development and more than 4,000 new residents arriving in the area since 2000. Building currently underway will add 2,700 more residential units and an additional 1.3 million square feet of commercial space. The innovative focus is alive and well under the current city administration. No end is in sight.

Continuing city projects and novel solutions nurture the seeds sown long ago and spur new growth. The list of attractive amenities is a long one:

But, despite the fact that Boston’s South Seaport district is the fastest-growing urban area in our state, there are still some things missing — like a real neighborhood grocery store. Housing is expensive, and “after hours” the Seaport might still feel like a tourist destination rather than a neighborhood. Still, it’s on its way to fulfilling its destiny.

Capital investments from both local developers and foreign sources has made the Seaport one “of the hottest submarkets in the country,” according to Glenn Varette, a Boston office managing director for Cushman & Wakefield. By all measurements, the prospects for 2017 are good.

In fact, other municipalities look towards Boston as a model for the future. Hartford, Conn., is one locale that would be happy to tap into what has become the norm in Boston.

One appeal of the Seaport is its diversity. Old harbor warehouses and historic buildings merge effortlessly with new construction and contribute to the vibrancy of both new commercial development and residential building. The notion that it’s important to sell “proximity and services” in addition to the “usual economic enticements” is the domain of Boston’s city official Nigel Joseph, a member of Mayor Martin Walsh’s Innovation Team, credited with enticing a G.E. startup business to join the parent company’s new world headquarters in the Seaport.

The Fort Point neighborhood represents a quirky mix of old and new. With perhaps 80 percent of its historic buildings reborn for new office, retail and and residential use, it has been one of the area’s growth catalysts.

The unique culture of the Seaport is cited as the factor driving the growth and development. The juxtaposition of the old and the new is viewed as the key to further growth. As old warehouses morph into homes for condos, retail stores and restaurants, with shiny new office buildings and mixed use developments changing the waterfront views, Boston looks forward to continued revitalization and even more exciting projects spurred by international investors.

At NEBS, we agree that Seaport development is exciting. We anticipate that the area will continue to thrive and attract new business and more residents to take its place as one of this city’s most exciting neighborhoods. We also look forward to seeing that new grocery store!